With the new release of Codex Tyranids the studio got their hands on some Genestealers and there was a lot of thought of just how should they be painted up. There have been some fantastic colour schemes in the past, including a pure bone colour, but in the end the traditional scheme won.

There has always been a lot of love for the classic painting style of the Space Hulk colour palette. With the genestealer always lurking in the shadows of the derelict hulk they are camouflaged to blend in with the darkest recesses of a corridor, ready to leap and tear apart a Space Marine. 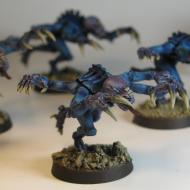 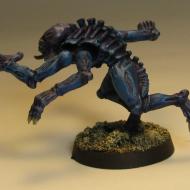 These six Genestealers are going to be posted as an auction on eBay and are priced to sell, to why not bid on them and pick them up to add to your Tyranid army, or even to your set of Space Hulk.

Today sees a brand new eBay auction. Seismic Studio has an Eldar Craftworld Iyanden Farseer up and the auction has seen a lot of traffic so far.

This model is such a beautiful sculpt, it just epitomises the alien realm of the Warhammer 40k universe. It has always been my view that Iyanden are THE craftworld of the Eldar race. Their craftworld is a symbol of a dying race and their wraithguard troops are ghosts of a once thriving civilization.

I have really enjoyed painting up this Farseer and after I get some commissions done I will maybe have time to paint up a squad of guardians and maybe a wraithknight. In the meantime, check out the auction on eBay. Make a bid today.

It’s been a little while since the last post from the studio as Christmas comes up so fast and then a week later we see in the new year. There are a few things I want to discuss about the hobby, my hobby and where we see things going for the year to come. First, a little housekeeping to take care of:

At new years resolutions are always made and it is about this time after new years most people made ones that they realise,  are far too unrealistic to accomplish. I never make resolutions and I mean I NEVER make resolutions, but I think it is time for me to break this trend and make one:

There it is and without (as they say) further ado, here is the first of my many miniatures to be painted up this year: 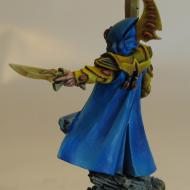 This model is just having the finishing touches put to it, but it is basically done and will be up for sale in the next few days. It’s a model that evokes such imagery of the 41st milennnia and the alien races that lie outside the grasp of the Imperium. 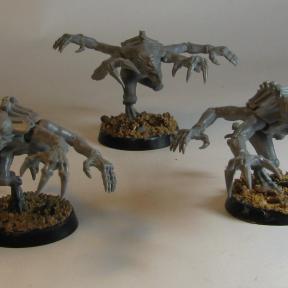 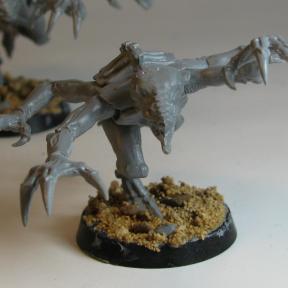 These classic models are some of the first that I picked up way back in 2nd edition 40k. They have been refined since then and I finally got my hands on a few to paint up. Expect these to show their ugly faces in the upcoming week.

It very exciting to see a new codex, so we will see what it reveals.

So they are just some of the newest miniatures to come out of the studio. I thought I would discuss the news of the finecast production discontinuing, albeit a little old, but we still see the odd model come out, made in resin, so I thought it apt.

It’s from my understanding that I heard the finecast range is finishing up production and I have just a couple of thoughts.

The first thing that comes to mind is just how many people I heard online voicing their opinion about the resin material. I think that it is a huge step for such a massive company like GW to just pull the plug like that. It must have taken a lot of complaints for the company to just cease the manufacturing. Now, I understand that there must be a large portion of the GW product line still to come, but I wonder how long it will be before we will see it completley die off.

I personally only purchased one model from the Finecast range, since there was just so much that I had already to paint, it seemed silly to just run out and add to the huge pile that I have going on, but the one model that I did buy, i has little to no problems with. Two issues I did have was trying to get a power axe bet back straight, even with the use of hot water, it just doesn’t sit straight. The other problem I had was that there was no evidence of bubbles, but, once I began cleaning up the model of mould lines, then I would reveal bubbles and they just kept on coming.

I will be sad to see a product line die off, before, I think that it had time to really reveal it’s potential, but maybe GW cut their losses.

Something else that has piqued my interest is the recent release of the Escalation and Stronghold Assault books. I finally can use my Thunderhawk in regular games, but at what cost? From what I see, the balance is nonexistent and I have two schools of thought on this release.

The first thing is that this is GW and balance had long gone out the window many editions ago. There is some semblance of balance starting to reappear in the newest 6th edition, but that died as soon as allies came into the scene.

The second is that I really feel like this is a great release to spur the recent momentum that I feel that GW have had with the strong Tau, Space Marine, and subsequent digital codex releases. This is a great way for most of us to breathe somemore life into our hobby while the Wintery months are here and we are all stuck inside.

Oh and by the way, speaking of Winter, it was -38 degrees Celsius, with windchill here in Ottawa today, good reason to paint miniatures.