So I was introduced to this amazing new hobby, this brand new world that was to me, as cool as Star Wars. This is a world that has such a rich background that it was almost like an overload to my science- fiction senses. I had to do it, I went out and purchased my own copy of Warhammer 40k second edition: 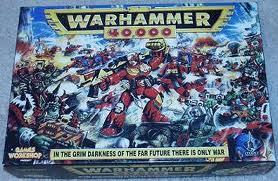 This box set not only had great models, intricate and interesting rules, but most interesting to me at the time was the background to the genesis of a space marine and the history of just how the Emperor was betrayed by Horus, a series that those of us immersed in the hobby have come to understand as The Horus Heresy. This background “fluff” to the creation of a space marine was, well it was absolutely awesome and had me hooked.

My good friend who got me involved in the hobby would play games against me on weekends and sometimes in the evening. Sometimes I would take the Space Marines, sometimes I would play as the Orks, but my calling came in the form of the following three words: The Aurora Chapter. 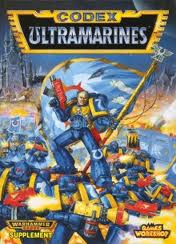 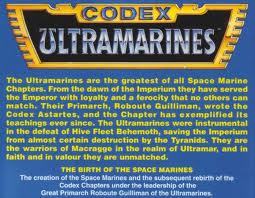 I had recently bought what was known as the Ultramarine Codex, since I had initially grabbed the Chaos Codex, but I wanted to utilise what was in the core box set. In looking through the Codex, I found it. The colour scheme that would pave the way for the entirety of my 40k hobby life.

To be honest, back in the 2nd ed. days there wasn’t much variation to each of the space marines found in the Codex Ultramarines, so it came down to colour and how they were painted up. But I really gravitated to the simple colour scheme for The Aurora Chapter; deep emerald green, green highlights, shoulder pad trim colour (in the case of the example in the Codex, black) and bone Imperial Eagle.

Sounds simple right? Well, I had also gotten my hands on a painting guide done by ‘Eavy Metal painter Mike McVey. I knew I wanted to be as good as a painter as he is.

Over the next year or so I just kept on painting and painting. I didn’t fall into the trap known as Warcrack 40k, well not yet, or so I had thought.