In the ever expanding 40k universe the newest race to explore the galaxy are also one of the coolest looking; TAU!

I was immediately struck by the style of the Crisis Suits. These models have a certain charisma that is unlike anything else GW have produced before. Sure, it has taken  a long time for the suits to evolve to a point where the entire army could consist of suits, but we have Forge World with the experimental suits to thank for that. 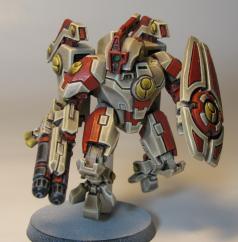 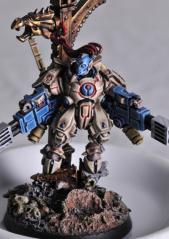 The Ethereal that I painted below helped me to love the Tau race that much more. I happened to paint it up for a Golden Demon entry and low and behold; it picked up a bronze trophy for me! Very stoked. 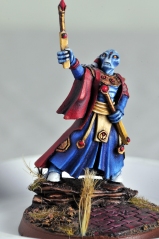 Lysander was my first effort into painting yellow. I wanted to take a Non Metallic Metal (NMM) style to him, as all the paint jobs that I had seen up until then, to me felt a little underwhelming. I wanted to show that this is a character that had paid his dues (he used to be a model in power armour.. he got a promotion) and the paint style needed to reflect that. I picked up a first place at a Warpstone painting competition with him.

The Imperial Fist Terminator squad were also an entry into Golden Demon. I wanted to paint yellow really well, but knowing that brown was a natural shade to create a moody yellow and to be the base colour would mean that it was going to take a lot to get the yellow just right. I picked up a silver trophy for my effort.. YEAH! 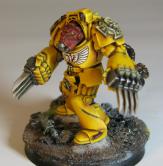 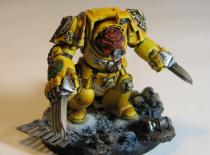 When I painted up my Iyanden Wraithlord, I wanted to take a different approach to my painting. I wanted to replicate the NMM, but I knew it was going to be a monumental task in that the armour, not only curves, but it flares out and tapers off at different places on it. Then pile on the job of painting it in yellow, a particularly daunting colour to paint for some people and it wasn’t going to be a cake walk. To be honest, my NMM didn’ really turn out the way I had envisioned, but it still looked organic, the way I feel the eldar are supposed to be portrayed. 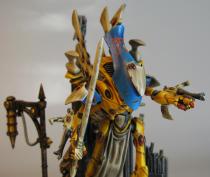 I decided to take the small shields that would have normally  been placed over the groin and hips and place them over the “face” and shoulders, giving the Wraithlord a bit more bulk. I also flared out the head of the model a little on the edges with some well placed green stuff and the large and small tabards, I styled in a flowing motion to emphasise wind blowing over the model. To top it off, I dynamically posed the legs to give him ( IT??) a sense of movement. The flow of the tabards certainly helped to bring it all together. Bingo; a silver trophy for my trouble. 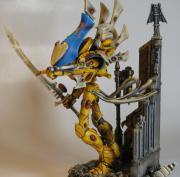 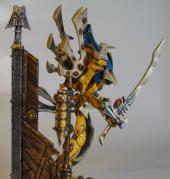 Ottawa, Canada,
Available for commission work all the time. Just drop me an email to discuss your needs.
%d bloggers like this: