I have generally been a Warhammer 40,000 gamer and painter, so when it comes to working on Warhammer Fantasy models, I generally look at models that excite me as an artist. There have been many times when I have attempted to build and collect a fantasy army (Skaven, Dwarves and Tomb Kings) but the fiction surrounding the world of 40k always pulls me back.

The following two models I love for two different reasons. Firstly, the manticore conversion that I have done allowed me to work on an easy but awesome conversion by using the Dark Elf Lord Malus Darkblade on such a large model. The Wood Elf was a Mordheim release and when it came out as part of White Dwarf release, I felt it was a very different elf model than I had seen before. I just had to paint it up. I actually used it as my D&D character. 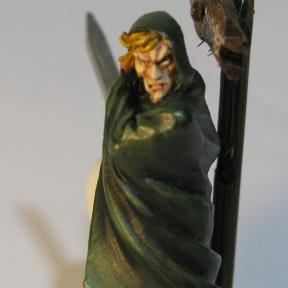 The two Skaven models below are a little testament to how my style has changed over the years. I painted up assassin Snikch way back in the late ’90’s and I was still learning techniques. My palette moved from a very bright one where I used many different colours on the same model (reds, greens and deep blues); to a more recent paint job on Throt;The Unclean, where I would use a colour or two and vary it up a little. It goes without saying that the models themselves allow for these palettes, its just that much more pronounced with Snikch.

A couple of miscellaneous minis that I just had to get my mitts on to; the DemonSlayer (a Games Day 2006 release) and my D&D dwarf.